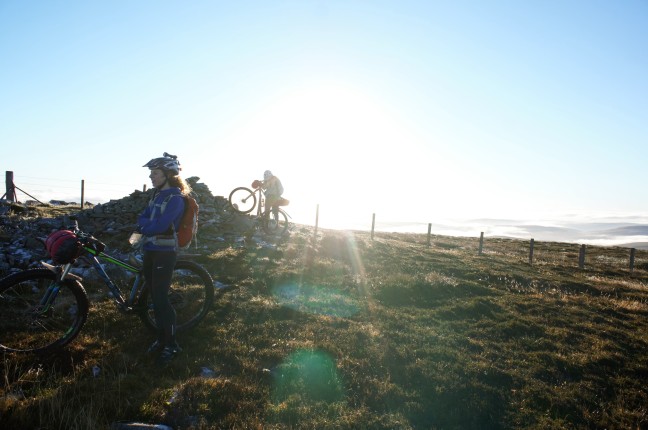 What’s more insane than strapping a load of camping gear to your nice light mountain bike, riding past a some cosy hotels and B&Bs, and sleeping in a hedge somewhere? The answer lies in the world of competitive long-distance mountain bike challenges, where not only do you run the full gamut of discomfort, you do so in order to beat your fellow riders, for no reward except fleeting fame in a small community of like-minded oddballs. But if you must dip a toe into these murky, freezing waters, you could do a lot worse than the Capital Trail, a 155 mile self-supported time trial through lowland Scotland, starting and finishing on the edge of Edinburgh. 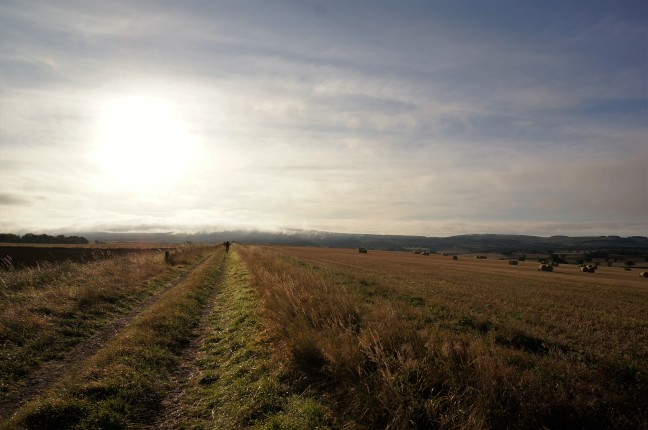 The brainchild of Markus Stitz, last seen riding around the world on a singlespeed, the Capital Trail can be ridden at any time of year, but there’s also an annual mass ride. Entry is free, and it’s a chance to either test yourself against a bunch of fitties, or ride the route in a more sociable fashion.

We set off early, confidence buoyed by finding a bakery that’s open at 6.30 am in a sleepy suburb. The ride starts on the beach at Portobello, giving fat bikes a temporary advantage. Then it picks up a network of riverside paths that gently shepherd you out of the city. 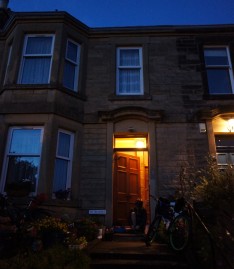 From the start the route has the feel of being designed by a rider, with every last bit of possible fun thrown in. This is helped hugely by Scotland’s access situation, which means that any trail is potentially fair game. Over the course of the event we’ll ride through country estates, open moorland, trail centres and cheeky urban singletrack, sometimes within the space of a couple of hours.

After leaving Edinburgh behind, the GPX dives off through Carberry Estate, and into muddy woods crisscrossed with cheeky downhill tracks.  A group of bearded lads on trail bikes are comparing hangovers and styling up any small feature they can find. At this point we’re still riding in a big group, chatting away, but gradually the pack starts to thin out. The next few miles are a mellow mix of farmland, riverside cycle path, and converted railway track, before turning rudely upwards into the Lammermuir hills. 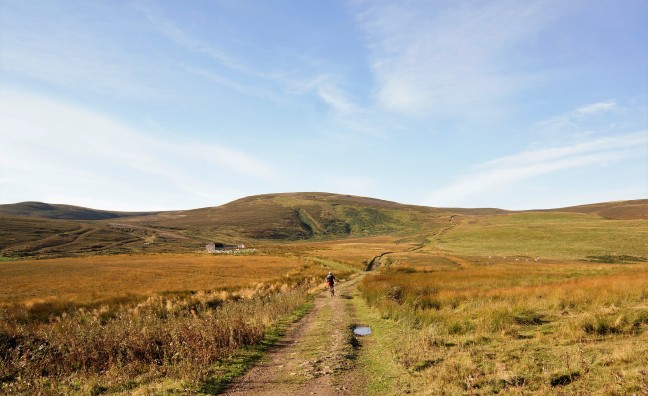 As if the first proper climb isn’t enough of a shock, the trail involves several river crossings, all of which are definitely wet feet territory. We pick up bikepacking newcomer Paula, who is on her fourth ever mountain bike ride, just as her hubs and socks receive their baptism. Her verdict: “Refreshing”.

The trail passes an immaculate bothy, but it’s barely lunchtime and we have to press on. There are more river crossings. We bid farewell to Paula, who rides on (and later turns out to be the first female finisher), and stop at the leisure centre in Lauder for brunch. Bacon tastes great.

The route then takes to the road for a bit, and we reencounter the group of lads from earlier. After a short tarmac hack we’re back on farm tracks, headed towards a prominent feature that I immaturely refer to as The Boob Hills, but which I later find out is Eildon, home to massive Bronze Age settlement. 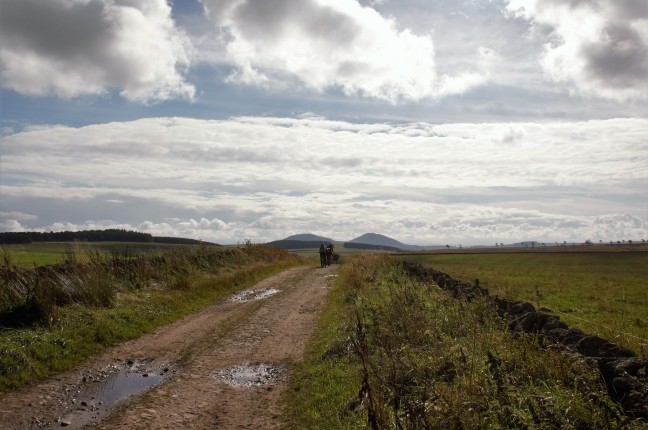 The dirt tracks drop us into Melrose, via a slippery rock-strewn descent and some sinuous singletrack. We stop for a coffee and the pavement briefly becomes a bike workshop. Then we’re off again, along an idyllic riverside path with patches of purple crocuses.

The idyll is temporary as there’s a long, grinding climb up to the Three Brethren, which takes up the rest of the afternoon. It’s only the third highest point of the ride, but it doesn’t feel like it. Then we traverse across to the top of Caddon Bank for a big section of the Innerleithen red route. The prepackaged fun of the trail centre comes at just the right point in the route to lift everyone’s mood.

Dropping out of the bottom, we make a beeline for the Traquair Arms, whose lovely staff  conjure up pork scratchings in response to my cravings. Dinner is polished off, darkness sets in, and it’s up the hill to the suggested bivvy spot. Most riders push on, but we set up bivvy bags, tents and hammocks, and I spend the rest of the evening trying unsuccessfully to take photos of moonlit riders inching their way up the climb behind us.

Waking up the next morning, we know exactly what’s coming – a huge push up Stake Law with short, mostly futile sections of riding. The descent on the other side is a rutted, rocky rollicking ride all the way down to Peebles, where we discover that Costa Coffee taps are useless for filling up water bottles.

Then it’s off for the optional loop of Glentress, which this Sunday is full of kids having mountain bike lessons – a heartwarming sight. I get carried away on the section after Spooky Wood and pie-dish a new rim convincingly. 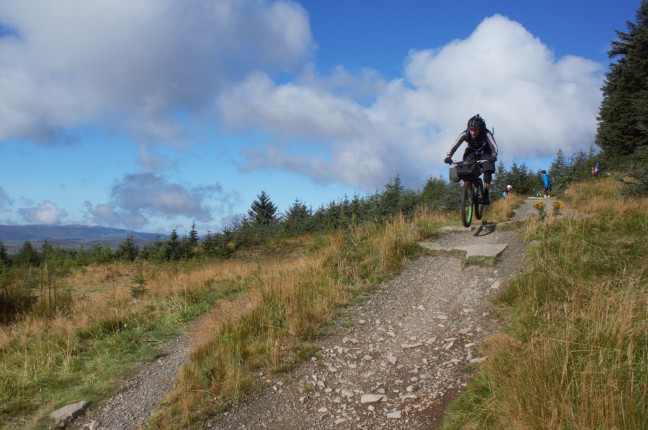 After fixing this we’re running late, so we decide against another stop at the Hub and head on to West Linton.

The dot on the GPS takes us up a drove road, through dank slippery pine forest, and then out along grassy singletrack, with a glorious view reminiscent of the classic Welsh trail in the Doethie Valley. 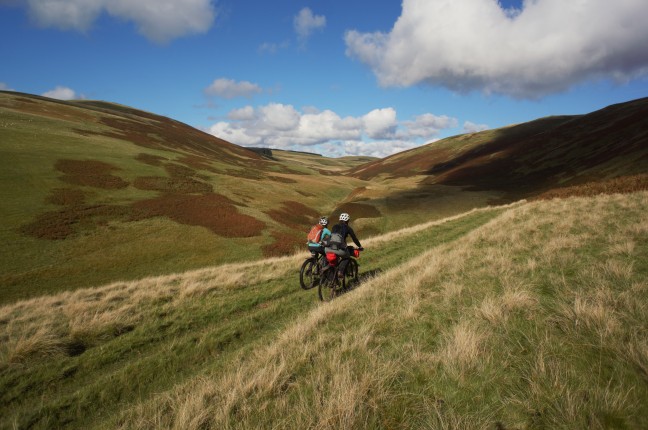 We drop down to West Linton and find ourselves unable to resist its impossibly picturesque tea room. After soup and a sarnie it’s off up a dirt track to Carlops and the Pentlands. We do one final, huge push up the Monks Way towards Nine Mile Burn, then undulate through Edinburgh’s pet mountains, along some sadly sanitised but still pleasant paths. 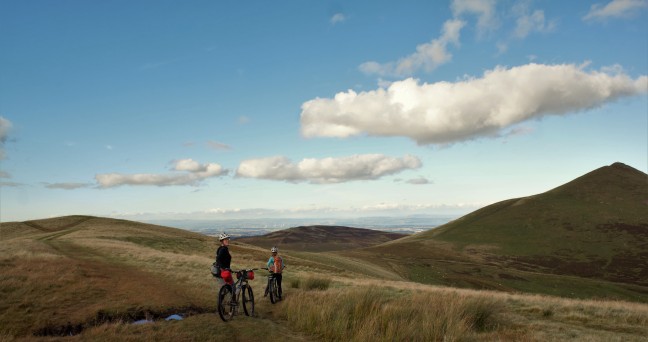 A mega descent to Currie, via the rocky denouement of Poets Glen, feels like the homeward run, but the ride is far from over. Joining up the ribbons of singletrack through the outskirts of Edinburgh takes all our navigational brainpower, as we pass the RBS headquarters, a tram depot, parks, Sustrans paths, and two particularly cruel flights of steps on the River Almond Walkway. 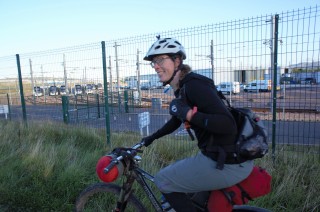 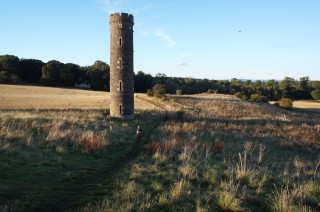 The final stretch is a long spin along sea front seems to go on forever – but probably not if you’ve cycled round the world.

The glorious sunshine has helped, but overall it’s been a brilliant weekend’s riding, an eclectic personal mixtape of the best backcountry in the Central Belt. With Markus currently working on an extended loop, the Capital Trail is the perfect introduction to bikepacking events.