This trip started at the centre of a Venn diagram, with circles labelled “adventure”, “mountains”, “novelty”, “slightly warmer than the UK” and “flights at the end of March”.

Bulgaria isn’t anyone’s idea of a dream destination, and in parts it looks a lot like a militant anti-gentrification campaigner’s fantasy. There is grinding poverty in evidence, and even the more affluent bits aren’t going to win any best kept village awards. But it ticked the boxes, it’s incredibly cheap by European standards, the people are outgoing and friendly, and once you leave the flat plains of the country’s centre, there are mountains, mountains everywhere.

We planned an off-road tour, heading south east from Sofia to take in Vitosha, the Rila mountains, and the Rhodopes. It’s still very much shoulder season, so instead of travelling light with mountain bikes we put knobbly tyres on the tourers, and stuff our panniers with all our winter kit. Then it’s off to Sofia, where we stash our bike bags at a hotel near the airport and hit the road.

On the way out of the capital we cut through a huge park, which is criss-crossed with winding singletrack trails, and get our first experience of Bulgaria’s many rickety bridges. It’s quite intimidating going somewhere where trying to read the road signs is a challenge, but we seem to have no trouble getting what we need, and there are thankfully some universal terms: a shop assistant says “ciao” and a kid urges us up a hill with “gas, gas!” We head off through the Vitosha nature reserve. We’ve all met a cyclist who is barely making any headway thanks to the amount of stuff they’re carrying. After an uncomfortable first kilometre of stop-start riding, I feel like I am that person. Thankfully though the path becomes a steady traverse, with lots of wibbly rustic log bridges. There’s more mud than I was expecting but there’s also less snow. We’re in the largest deciduous forest I’ve ever seen in my life, but it’s also right next to a city, a fact that we keep being reminded of as we encounter folk with a mobile phone in one hand and a dog lead in the other.

After a while we can no longer see lights below us. It’s starting to snow. I go to apply my brakes and there’s a rasping, but no stopping. My feet won’t stay on my flat pedals as the mud on them has frozen. My gears are also incapacitated by the ice, leaving me stuck in the lowest one, although to be honest that’s all I need. This is turning into one of those rides, and it’s only day one.

We stop at a hut that appears to be the local party hangout – complete with two fire places and a massive bag of empty beer cans. We string a hammock up across two beams and manage to get a respectable fire going, despite almost no kindling and nothing to split logs with.

The next morning we head into the forest, join the E3 hiking route and climb up through the beech trees into the snowline. The snow deepens and we’re forced to start pushing some sections. There are lots of things to distract us as we trudge on: purple crocuses peeping through the snow, tracks that appear to belong to a large cat, and stunning mountain views. We drop down out of the snow and realise that the cold was actually helping us. A lot of the track is silty mud- rideable when frozen but not once it melts. We refuse to let it win, plod on, and see the Rila mountains rising up in front of us for the first time.

On the way down we pass an elderly couple chopping wood. I spot strange smooth tracks on the mud and realise that they are from dragging down a cut log for next year’s firewood. It puts our self-inflicted struggles into perspective.

A fine but insistent fall of snow the next day puts paid to any ideas of crossing the ridge next to Mount Musala, so after a breakfast of mekitsa (massive stodgy doughnuts covered in sugar) we drop down onto the road and begin a 6 mile descent. I become aware of a stinging feeling in my shins and realise that ice is forming on them. Overtrousers donned, we continue down to a valley that could be in a different country, with blackthorn blossom and storks looking for nest sites.

Given that the rain isn’t slowing down, we hit on a plan that no true bike packer would admit to: getting a train into the foothills of the Rhodopes. We lurch through the countryside at a leisurely pace, at one point stopping long enough for the passengers to step outside for a cigarette. We miss our connection so we ride 10 miles over some pavé that would have Les Amis De Paris Roubaix salivating, and eventually arrive at Peshtera, a well-to-do place which would qualify as pretty anywhere in the world.

Our route up to the mountains the following day is a steady climb up a valley for almost 20 miles. Beech forest gives way to spruce. We have lunch in a meadow covered in purple crocuses, then leave the road to head across the Rhodopes. The snow-covered fire road undulates gently through an eerie pine forest. There are vehicle tracks but we don’t see another human being for hours, until we pass a horse-drawn cart of workers on their way up to a hut. The birds sing loudly. A deer spots us and ambles off slowly. We begin to descend and start passing picnic areas, water points and dormant camp sites. We reach a “hut” which is actually a chalet above a friendly old couple’s house, with the basement converted into a bar. It’s basic and expensive by Bulgarian standards (a princely £6 each) but our host lights its wood burning stove, which immediately starts putting out the heat of a small thermonuclear reaction, and we’re sold. 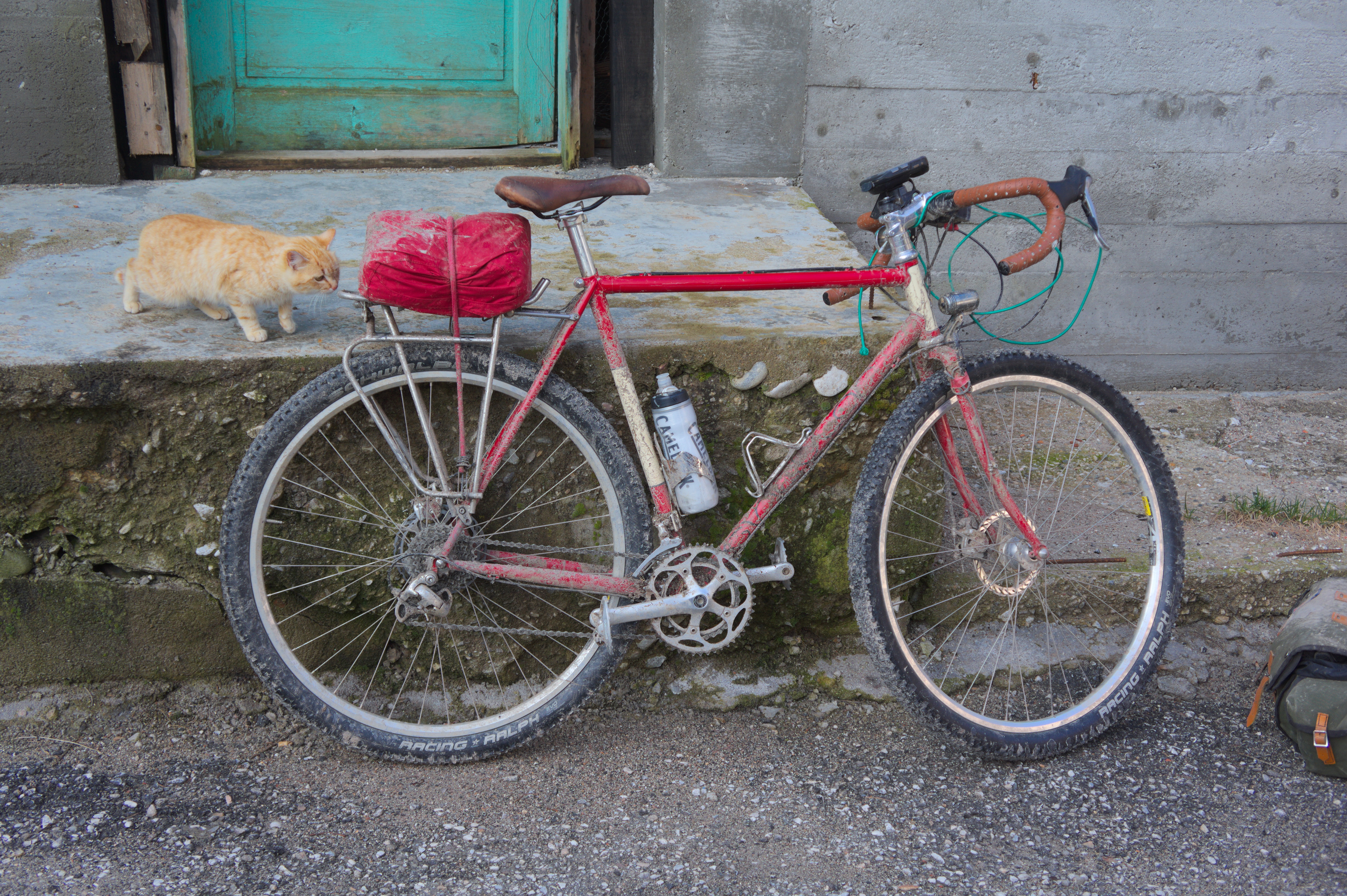 The next day sees us start out on a road that hasn’t seen a motor vehicle in years, and it clings perilously to the side of a cave-riddled gorge, as we pick our way around rock falls galore. We leave tarmac again and climb steadily up another gorge, past huge concrete gravel beds used to gather the raw materials for… more concrete, I guess.

The urge to cut out some switchbacks leads to the day’s Fitzcarraldo moment, where we lug a couple of heavily laden bikes up a track that could serve as a stage of the Enduro World Series. I’ve never lost a pannier pushing a bike before, but there’s a first time for everything. Thankfully the savage terrain eases out, but there’s more pushing as we make our way up a muddy alpine meadow. At the top we briefly ride along a ridge before hitting Bulgaria’s answer to the Megavalanche start, with deep snow covering an assortment of evil rocks. We coax the bikes down the steepest bit, and the bottom section is 10 solid minutes of bouncy shaly fun.

We emerge in Gela village next to a mosque with a wobbly wooden minaret, then start the last leg of the day, a long climb on a road which barely merits the term. After an epic winch up to the highest point of the day, there’s a swooping downhill that takes us the best part of an hour to complete, and features every conceivable surface. We pass crash barriers made of rubble, a roadside bar called “Tropicana” (in a horse box), and a grim, wire-fenced complex with an exercise yard full of men, a pack of dogs running around outside, and a lone security guard. All this is in pine-forested scenery with jutting limestone peaks that could fill several years’ worth of Rapha catalogues. The whole climb and descent goes by without seeing a single vehicle. Before long we’re checked into a hotel in Smolyan, where the proprietress sets about reviving us with home-made rakia, followed by a five-course dinner.

Wending our way back to Sofia the next day via bus and train, we’re already talking about what we’d do differently (less kit, come at a warmer time of year, ride through more mountains), and, by implication, planning our next visit…