Mountain biking is an expensive hobby. There’s the bikes, the kit, the inevitable breakages, the impulse upgrades, and the cost of all those holidays in exotic riding destinations (Swindon’s pretty good at this time of year, apparently). So are we being ripped off?

True, the financial barriers to entry are higher than some sports, but not as high as some. A bike costs more than a pair of running shoes, but less than a polo pony (I think – I have to confess I’ve never looked into this). And once you’re in, it’s a massive salad bar of options, with free-to-ride trail centres, acres of countryside that you can ride across even if you don’t own any of it, and countless opportunities to take the financial equivalent of a Strava shortcut. You can bring your own sandwiches, cadge lifts off mates, or even save on race fees by downloading apps where you compete against people whose phones have less accurate GPS chips (Let me know if I sound bitter). But for some people, that’s still not enough.

Some things in bike shops do command a decent sized mark-up. Take inner tubes, for example. No, bike shops don’t pay anything like a fiver a pop for them. But it’s worth considering what you’re actually purchasing. It’s not just a little airtight rubber sleeve with a valve in (although I’d rank pneumatic tyres as one of humanity’s better inventions in the past 200 years). What you’re paying for is the ability to buy one in a convenient and timely manner, from a shop staffed from 9 to 5 with helpful people, perhaps even in the middle of a ride that you’d otherwise have to cut short.

Think of it like a coffee shop. The mark-up on a hot drink is huge, but of course you’re not just paying for the raw ingredients. You’re paying for the ability to have it on a whim at a certain time and place, and not have to lug a Thermos everywhere you go. Of course, there are some people who’ll take the cheapskate option every time. I even remember one memorable riding trip to the Forest of Dean where a financially motivated refusal to use the café led, indirectly, to a leaky gas cylinder setting fire to a 10-foot circle of the car park, and almost blowing up its owner’s van. I couldn’t make up a better metaphor for the perils of cheaping out and doing it yourself.

Then there’s the well-worn argument that because some mountain bikes cost as much as a motorbike, we’re being ripped off. Doesn’t taking a load of the same technology that’s in motorbike suspension and brakes, shrinking it all to the point where you can push it along with 0.5 horsepower’s worth of meat engine, and throwing in a bunch of exotic materials and lower manufacturing volumes justify any sort of price increase? Umm, OK. I’m off to a backpacking forum to tell them that with the money they’ve spent on their fancy lightweight expedition tents, they could have bought a second-hand caravan. Then I’ll follow it up with a visit to a computing forum, to compare the costs and specs of a Macbook Air with a desktop PC I got off eBuyer. 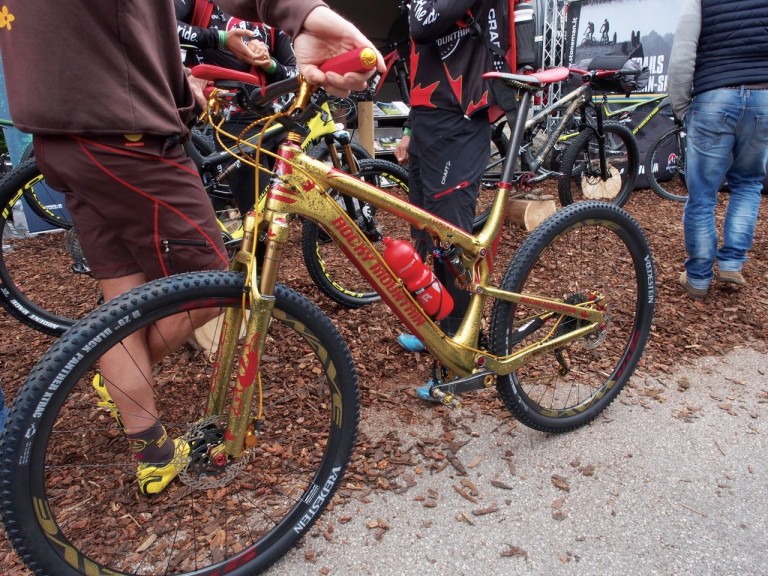 Time and again, we focus on the cost of the products and ignore the people who develop and sell them. Yes, there are folk earning a decent living from the bike industry, but I’ve yet to meet anyone who takes baths in tenners or buys football teams. Perhaps when we moan about RRPs, particularly of the more boutiquey products out there, we’re actually a bit jealous of anyone who’s managed to parlay their passion for bikes into a day job.

A great example of this is the handmade bike industry, booming in recent years, and also an unstoppable fount of “how much?” I’d bet the deposit on a custom Jones that not one of the how muchers has ever tried to make a bicycle frame from scratch. I haven’t, but I’ve mooched around Bespoked enough to know that the process involves buying some raw materials which are fairly expensive in their own right, cutting and shaping them by hand to an incredible standard of accuracy, then bonding them together to withstand treatment that would kill most domesticated riding animals in a matter of days. Yes, some people love it, but for me the process of making your own frame looks like more tedious hacksawing and filing than a successful prison break. It’s something that, if I had the cash knocking around, I’d gladly pay someone else to do.

There’s an awful lot of moaning on the internet, and this is in danger of being just a moan about moaning, so I’m going to make what are hopefully some constructive suggestions. Complaints about price typically take the following form: “X is really expensive, compared to Y”. So why not just go and buy Y? We’re all adults and, unless someone is reading this to you off paper in a high-security cybercrime correctional facility, we all have access to internet search engines that can find us the cheapest stuff.

Every action has an equal and opposite reaction, and every change in standards means that more early adopters will be flogging their old kit second-hand. Disc brakes on road bikes, changes to wheel sizes and funny-shaped steerer tubes all triggered a big injection of perfectly serviceable kit into the second-hand market, as people swapped for the latest and greatest. If you’re sceptical about new standards, don’t show it. Instead, tell your friends about how badly your 26” wheels roll, how flexy your straight steerer forks are, and how bored you are with your creak-free threaded bottom bracket. Pretty soon, you’ll have convinced them to upgrade, and you can buy their old kit cheap.

The discussions about prices also seem to congeal around the toppest of top-end kit: the £8k bikes, the £2k wheelsets and the like. Perhaps we’re constantly looking upwards, coveting the latest and greatest thing at the top end of the market, but forgetting how we can enjoy the stuff we already have. If mountain biking is starting to seem like an exclusive millionaire’s club, just switch off the computer, put down the magazines, and go for a ride.